Q & As for ‘The Shadow Sister’

1. What was the inspiration behind the idea of The Seven Sisters and writing a series of seven books?
In January 2013 I was searching for my next story, but wanted to find an overarching angle to add another element to my past/present writing. Something that would challenge and excite me – and my readers. I have always watched the stars – especially the Seven Sisters constellation, and on a frosty night in North Norfolk , I looked up to the heavens, and – thinking of our own seven children – came up with the idea for a seven book series based allegorically on the legends of the Seven Sisters.

2. What made you choose Rio and Christ the Redeemer as the backdrop?
I was in Brazil promoting my book and, having fallen in love with the country and its people, realised I had never read a book based there. I went up Corcovado Mountain to see ‘Christ the Redeemer’, stood in front of him and marvelled at the statue. I wondered how on earth it had been built and what stories lay behind its construction over eighty years ago. I began to investigate further and heard about the mystery of whose hands were actually used as the model…

3. How much time did you spend in Brazil whilst researching the novel?
After my initial visit, I went back to Brazil for a month and lived in an apartment in Rio de Janeiro. By coincidence, I discovered my neighbour was Bel Noronha, the great-granddaughter of Heitor da Silva Costa, the architect and creator of Christ the Redeemer. She gave me access to his diaries and a vast number of documents covering the period of construction. I then went up into the mountains to stay in The Santa Tereza Fazenda – an old coffee farm – which became the setting for Bel’s childhood home in the book. I then wrote about Rio in the present day, wanting to show through the story of my heroine, Maia, what an amazing, vibrant city it is. Like any other, it has its good and bad characteristics, but part of the book is set in a favela – I had one right on my doorstep in Rio and watched the kites flying and heard the samba music emanating from it every night. Maia subsequently discovers this part of her heritage. And as she watches the young children learning to samba for carnival, she realizes they are dancing for their lives. I seriously wept buckets writing that chapter, because I’d been there and seen it. 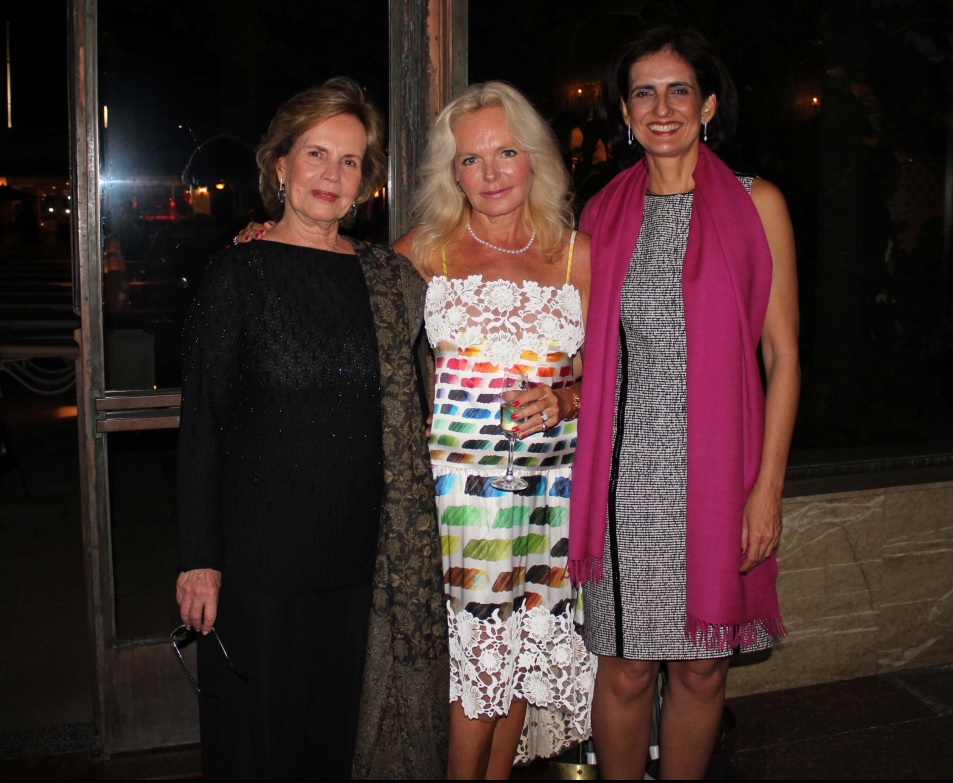 With Bel Noronha and her aunt at the worldwide launch of ‘The Seven Sisters’ at the Copacabana Palace Hotel, Rio de Janeiro, Brazil.

4. Writing a seven book series must be daunting prospect. Did you have to work out the plot of the final story before you began?
Ironically, knowing where I’m headed for the next six years is a positive, not a negative. Even though each book is the stand-alone story of each of the sisters, I see them all as one huge epic book. So for the foreseeable future, I won’t come to the end of a story and have that dreadful moment when I have to think ‘what do I write next?’ And the best thing is, I don’t have to say goodbye to any of my characters for years, because I mourn all my ‘imaginary friends’ when I finish a story. As a novelist, it’s the most exciting thing I’ve ever written because it’s so multi-layered. Not only am I allegorically following the myths and legends of the Seven Sisters, but there is an overarching plot that runs through each one, only revealed in the final book – the details of which are hidden in the stories and known only to me.

5. Mythology is threaded throughout the story. Which myths did you choose and what inspired you to base your series around them?
The astrological and mythological links add another dimension to the series, and that is what makes it so enjoyable for me. There are so many myths that surround the Seven Sisters, from the Mayans to the Greeks to the Aborigines, and I decided to use the Greek myths as a blueprint of sorts for the characters and some aspects of the plot. I’ve also had great fun coming up with anagrams and hidden clues based on these myths. Leonora, my youngest daughter, started me off with the anagram for the sisters’ adoptive father, who is roughly modelled on Atlas, the Titan who held up the world and sky on his shoulders. Adding a ‘P’ for Pleione, their mother, she came up with ‘Pa Salt’ – perfect for a father who has a great love for the sea. There are many more anagrams in the stories if you want to look for them.

However, I also wanted to make sure that my readers don’t have to know the myths to understand the story. I also have to be careful to make sure that my sisters remain modern women – so while Maia, the eldest, shares characteristics with her namesake in the Greek legend, she is still a thoroughly 21st century girl.

6. Was it hard to align Maia’s story to her mythical self, and how would you characterise her?
In the Greek legend, Maia is known for her outstanding beauty and her reclusiveness — she is portrayed as a shy, waif-like woman who prefers to live alone in a cave. She is known as ‘The Mother’ and ‘The Carer’, and I used all these aspects as a blueprint for my fictional Maia. Even though modern-day Maia is from a privileged background, her life has not been easy. Being the eldest sister, she feels a great sense of responsibility towards her family. Maia is the only sister who still lives alone in a Pavilion in the grounds of ‘Atlantis’, the family home on the shores of Lake Geneva. Her father’s death shakes her to the core and forces her to face the past she has been avoiding for years. Her odyssey to Brazil to find out more about her ancestry changes everything and slowly she learns to embrace life and love again.

There are so many different legends about the sisters and a lot of raping and pillaging of the sisters by over-sexed and powerful Greek gods! One in particular – the ‘King’ of the Gods, Zeus – who had affairs with three of the sisters. I decided I needed to split his particular character into two people in the stories – they are father and son – to make it more palatable for modern-day female readers.

7. Many characters in the historical sections are based on people that really existed – did this make it easier or more challenging to write the book, and will this be a feature of the next six books?
Breathing life back into these amazing people was definitely a challenge, but one I loved. Although I’ve had to be even more careful about research – I read all I could about Paul Landowski and visited the museum in Boulogne-Billancourt, Paris. And I also had access through Bel Noronha to Heitor da Silva Costa’s private diary. That’s when you can really recreate their personalities – using their own thoughts.

8. Paris in the 1920’s was an exciting and hedonistic place – what influences did you use to capture the atmosphere in this story?
Being of French heritage and living there every summer, I have always been drawn to France. And especially the early 20th century when Paris was the capital of the creative world, when art and philosophical thought was all, and materialism meant nothing. One of my favourite authors is Scott Fitzgerald who lived partly in France during the period this part of the book takes place. He and his wife Zelda formed part of the Bohemian set that drank all day and danced all night. If I could have been born at any time in history, it would have been then – right up my street!

9. What were the most fascinating historical facts you learned about Rio and Christ the Redeemer?
Christ the Redeemer is literally a miracle: the sheer size and weight of it built perilously atop Corcovado Mountain and the genius of Heitor da Silva Costa’s construction is in itself fascinating. I also discovered the outside is clad in thousands of tiny soapstone triangles. The society women of the time added their own prayers for their loved ones on the back of them – just as Bel does – before sticking them onto netting to make large squares. And lastly the story of the model used for the hands. For years she was thought to be Margarida Lopes de Almeida, a famous and artistically gifted Brazilian woman. But on her deathbed she admitted it was not her, creating the mystery of whose hands they really were, and giving me a wonderful idea for my plot . . .

10. Some of the male /female relationships in the book are very loving but are also fraught with tension and sadness. Was it emotionally difficult to write the book?
When you are writing, you live with these characters in your head 24 hours a day, and you become incredibly attached to them. I suppose because of my history as an actress, I get very involved. In this way, it can be emotionally draining to write the distressing parts because I am so close to them all and it upsets me when I can’t give them a happy ending. During the editing process, I’ll often cry as I read back through painful scenes. I have a strange style of writing, in that I dictate the entire first draft of the novel into a Dictaphone, rather than sitting down at a computer typing. Not only does it mean I’m free to walk around in the fresh air, but also that I can really inhabit my characters and let their stories flow out of me.

11. Can you tell us a little about the next book in the series and which of the sisters is featured?
The Storm Sister focuses on Ally, or ‘Alcyone’, the second sister. Ally is very different to Maia. In Greek mythology, she is known as ‘The Leader’ and watches over the Mediterranean Sea, making it calm and safe for sailors. My Ally is a professional sailor who also has a talent for music. She’s brave and strong and I absolutely adore her.

The Storm Sister begins at the same point as Maia’s story — with Ally hearing of the death of Pa Salt. Like Maia, she is given clues to finding out more about her heritage, and these lead her to Norway where she finds out more about the young Anna Landvik, who, in 1875, is given the chance to leave behind her small village life in the mountains and to travel to Christiania to sing in the first production of Henrik Ibsen’s Peer Gynt poem, for which Edvard Grieg wrote the world famous music for The Peer Gynt Suite. This includes both ‘Morning Mood’ and ‘In the Hall of the Mountain Kings’. Even if you think you’ve never heard of them by name, I promise you, you’d recognize both of the tunes immediately.

In a way, The Storm Sister is even more ambitious, because Ally must go back to 1875 to discover her story – one hundred and forty years ago – which is a huge time period to cover. The novel is truly inspired by my love for Norway and its kind and beautiful people. And of course, Grieg’s music. I took great care in researching Ibsen and Grieg, two great cultural heroes of Norway and the wider world. And I only hope I’ve captured that magical period and the haunting music Grieg wrote. And of course, the mystery of Pa Salt’s death – and who he really was – continues.